The problem with the “magic bullet” cure

You and I both know there’s no magic pill for chronic pain or chronic fatigue. Yet, even when we’re ready to try complementary or alternative therapies, it can be hard to move away from how we expect medication to work.

When I got strep throat as a kid, I went to the doctor, got an antibiotic, and within a few days, I was back to normal. We know healing from chronic illness doesn’t work like that. However, what we sometimes overlook is no healing works like that. When we take medication, we build up a resistance. Each time you have to take the medication, its effect is a little less potent. So while medication can be a cure for acute illnesses that won’t go away on their own, it’s not a long term solution.

I took antibiotics a handful of times a year as a kid (something doctors have now stopped doing unless absolutely necessary because the medical world is slowly learning this lesson too) for strep throat, ear infections, and other illnesses common in kids.

Yet, when I was diagnosed with chronic fatigue syndrome at 13, the only abnormality they found in my blood work was low levels of strep throat – something I had taken a round of antibiotics for six months earlier. The antibiotics had stopped working for me.

When I was in university and hopping from sleeping pill to sleeping pill, I learnt this lesson very quickly. Occasionally I’d find a medication that worked…until it didn’t. And they all, at some point, stopped working. For a week or two, I’d fall asleep without hours of tossing and turning, as the weeks went on, the effect of the medication was less and less until I may as well have not been on any medication at all.

I was waiting for them to find a cure for chronic fatigue syndrome, to find a medication I could take that and feel back to normal within a few days. But I was missing what was already right in front of me – medication – for this type of chronic illness – didn’t work, and there were two reasons why:

1) It wasn’t addressing the root cause of my illness, which meant I was utterly dependent on the medication for feeling better.

2) Because I was completely reliant on the medication, I had to keep taking it, which meant I built up a resilience and the medication stopped working.

I was back to square one.

Then I discovered yoga and meditation. Yoga and meditation were very different than the sleeping pills I had been taking. The first time I did yoga, I felt good, but not amazing. The main reason I kept practising yoga was not because of how good it felt, but because it was the only exercise, I could do that didn’t cause a regression. 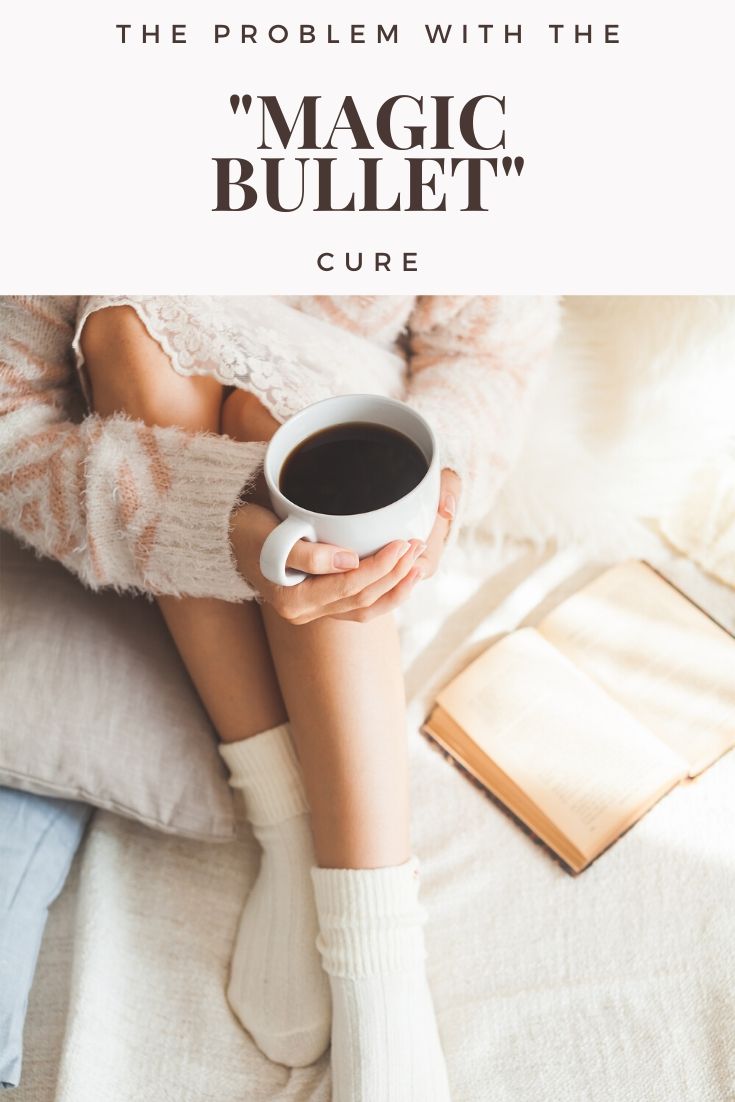 The problem is, we’re so accustomed to seeing healing through the lens of medication that we’re not prepared for a healing process to work in this way. So, we try alternative medicines because we know there’s no magic bullet pill. We might try yoga or meditation or qi gong, or another therapy, and it might be pleasant, it might help a little bit, but it doesn’t get us far enough. It doesn’t get us where we want to be. And so, we give it up. Or we do it occasionally. We say “Oh, it didn’t work for me” or, “It helped a little, but I wouldn’t do it every day” and we dismiss the healing process before it had a chance to weave its’ full magic.

I know I did this when I started doing yoga. I was inconsistent with my practice. I could tell it was making me feel better, but I didn’t see how the effects could be significant enough to restore my energy levels to what they were before I was sick. It wasn’t until almost a year later when I joined a mindfulness-based stress reduction course and then a mindful yoga course that I started to see significant improvements. During these back to back courses I was forced to make yoga and meditation a regular practice for three months, and that’s when I saw that not only could these therapies be as effective as medication, they could be stronger.

But, the way I was taught to think about health, illness, and healing didn’t prepare me to deal with an illness like chronic fatigue syndrome. I had to find out through trial and error that the cures that work need more time. As the years' pass (now ten years into my yoga practice!) my healing is still continuing. The effects of my yoga and meditation practice continue to make me stronger, calmer, and filled with energy to the point where I’m even healthier than I was before I got sick!

Name me a medication that can do that after ten years.